Frame of Reference in SGBV Prevention Against and Among Young Refugees, Asylum Seekers and Unaccompanied Minors in the European Reception & Asylum Sector (SENPERFORTO)

Applying a Community Based Participatory Research Approach, Senperforto aims to enhance the prevention of sexual and gender-based violence (SGBV) in the European Reception and Asylum sector by the development of a European Frame of Reference for Prevention of SGBV in this sector. In 2010 we first conducted a Knowledge, Attitude and Practice (KAP) Survey on SGBV experience, prevention and response among both professionals and young asylum seeking residents in different reception facilities in each of the 8 partner countries (Belgium, Greece, Hungary, Ireland, Malta, the Netherlands, Portugal and Spain). This study helped to fuel the development of the Senperforto Frame of Reference for Prevention of SGBV in the European Reception & Asylum Sector. This Frame of Reference consists of Standard Operating Procedures, a Code of Conduct, a SGBV Prevention Sensitisation Kit (flyers and posters) and a Make it Work!-Training Manual. The instruments have been pilot-tested in the 8 partner countries and were presented at the final Senperforto Seminar,
held in Brussels on December 10th. The Frame of Reference instruments are available in 11 different languages on one DVD. More than 1500 copies have already been disseminated throughout Europe and beyond. Free copies (except for port costs) can be ordered at ICRH. 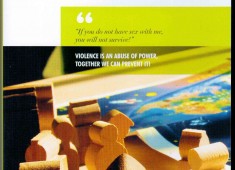