Female Sex Work and the 2010 Soccer World Cup: No spike in supply and demand of paid sex through newspaper and online advertising

Now that the dust has begun the settle, the sounds of the last Vuvuzela to fade, and the flags and razz-mataz has quietened; now is the time to reflect on the experience in a way that makes us leverage the...

Now that the dust has begun the settle, the sounds of the last Vuvuzela to fade, and the flags and razz-mataz has quietened; now is the time to reflect on the experience in a way that makes us leverage the good, mitigate where necessary, and take lessons for the future.

In the months leading up to the 2010 Soccer World Cup in South Africa, the media suggested that between 40 000 and 100 000 sex workers were needed for the projected half a million football fans who would travel to South Africa to join the soccer fiesta. A deluge of reports and campaigns convinced the public that a substantial number of women and children would be trafficked into host cities to meet the apparent increased demand for paid sex. A similar phenomenon was noted in the 2006 Soccer World Cup in Germany. This time, however, the hysteria was amplified by fears of an increase in the incidence of HIV, given that South Africa has amongst the highest prevalence of HIV and other sexually transmitted infections in the world. In many instances, trafficking was erroneously conflated with sex work, thus complicating efforts to address human rights violations against sex workers.

In response to this media frenzy and public fears, a number of national and international health, gender and development agencies invested substantial funds in the distribution of free male condoms, generalised HIV/AIDS information campaigns for South Africans and visitors, and rolling out anti-trafficking campaigns. Yet, none of these investments were based on rigorous research or inquiry and could have been better employed if done in a targeted manner.

In light of the lack of systematic research on the supply and demand of sex work during big sporting events and to strengthen the evidence base for future programming, the United Nations Population Fund (UNFPA) commissioned two research studies: (a) one quantitative study among female sex workers who advertise their services online and through newspapers, and (b) a mixed methods study focusing on street- and brothel-based female, male and transgender sex workers in three host cites.

The results of the quantitative study are summarised below.

These results are at odds with public fears about a massive increase in the number of sex workers – both domestic and cross-border – during the 2010 Soccer World Cup. The research findings also contradict concerns about a huge increase in demand for paid sex services, and engaging in unprotected sex. These findings point to the need for rational planning for future international sporting events that is based on evidence, not sensationalism.

How was the study set up?

We phoned a large group of female sex workers advertising online and in local newspapers at three points in time:

We obtained the phone numbers of sex workers from newspapers and a popular adult entertainment website where sex workers advertise their services. We focused on the Classifieds section advertising sex work in local newspapers in the greater Johannesburg, Durban and Cape Town areas (three of the host cities). After filtering out duplicate adverts for the same sex workers, we listed the phone number in random order and started to contact the sex workers on the list until we had at least 220 respondents who were willing to participate in the study. Each phone call was preceded by an SMS to the sex worker explaining the purpose of the study, and that participation was entirely anonymous and voluntary.

What did we investigate?

Participants were asked about

What did we find?

By the end of the study, we had information on 663 sex workers. At baseline (pre-World Cup period), the average number of clients in the past week was 14.4 clients (newspaper) and 11 clients (web-based) in sex workers advertising in these two forums. These numbers did not change significantly during or after the World Cup.

The average age of sex workers decreased from 28.6 years at baseline (Pre-World Cup period) to 26.9 years during and after the World Cup. Given the relatively small decrease in age, the importance of this change over time may be limited. Self-reported condom use was high (99.0%) at baseline, and did not change during or after the Word Cup.

What do these findings mean?

Although our survey revealed a small increase in the number of sex workers advertising online during and shortly after the World Cup, our findings do not provide evidence for the massive increase in supply of sex work around the World Cup, as anticipated by the media. Neither does the data support the widely disseminated hypothesis that thousands of foreign women and children were trafficked into South Africa to meet the increase demand in paid sex. The client turnover rate increased only by a few percentages during the World Cup, yet the fraction of foreign clients doubled during the event among sex workers advertising in the newspaper. This may mean that a part of the local clientele was temporarily replaced by foreign clients.

Given that reported condom use was nearly universal throughout the duration of the study, we estimate it unlikely that the slight increase in sex work during the World Cup has resulted in a considerable acceleration in transmission of HIV and other sexually transmitted infections. The distribution of condoms and messages on safer sex might have contributed towards this success, but the over-emphasis of this strategy – particularly in the absence of distribution of female condoms – may well be replaced by effective and rational planning for future events.

Future campaigns and programmes that focus on sex work, trafficking and international sporting events should be based on systematic research – not sensationalism that leads to further stigmatisation and discrimination against sex workers while increasing their vulnerability to violence.

Seminar: ‘Beyond the tip of the iceberg’ Sexual violence in Belgium 17th of June 2021

END_OF_DOCUMENT_TOKEN_TO_BE_REPLACED 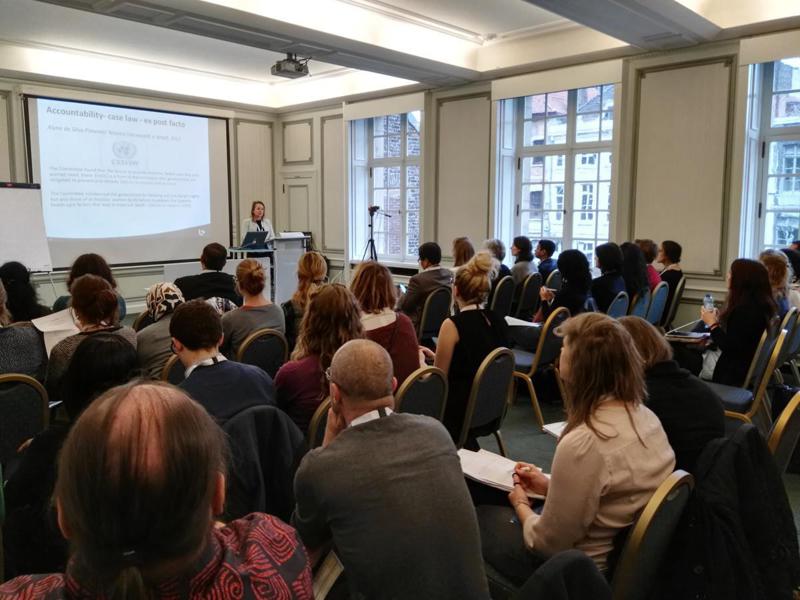 On 1 and 2 December 2016, the Academic Network for Sexual and Reproductive Health and Rights Policy organised its first international conference.